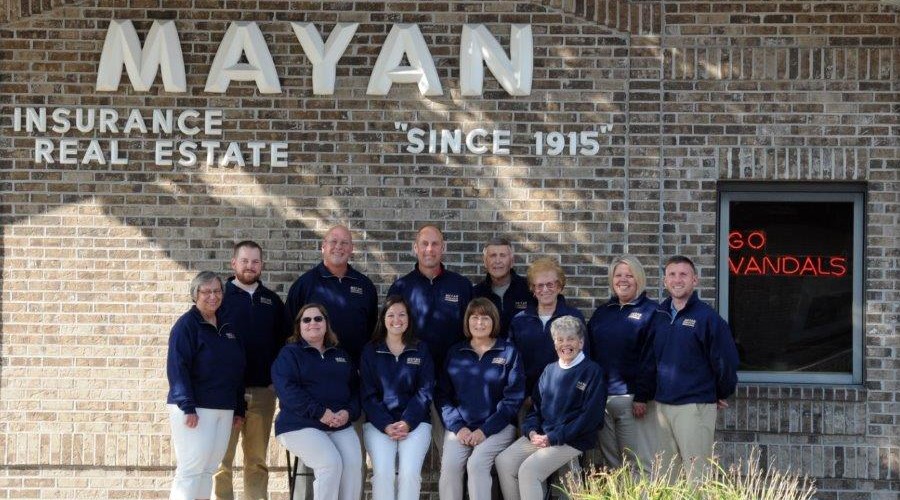 It’s a long and winding path that leads from an early twentieth century harness shop to a successful insurance agency, but the Mayan family of Merrill, Michigan, has successfully made the transition while still conducting business from the site of that original 1915 shop. It all began when the war clouds of the First World War began to form. Carl Mayan and his wife, Mary, emigrated from Germany to the United States. They settled in the small central Michigan farming community of Merrill where Carl purchased a harness shop for $100. Carl had learned the leather trade well while serving in the German army artillery, where horses were the primary movers as they were in the farming industry. The business flourished in this fertile farm countryside, but with the advent of gasoline-powered farm machinery, the harness business declined and a retail clothing store including shoes and shoe repair evolved.

Carl and Mary’s only son Rudy worked in the family trade from a very young age. While in his late teens and early twenties, he founded the insurance agency in a corner of the store. Rudy operated and developed the business to the extent that by 1955, the family’s retail business was closed and insurance became the main business focus. Rudy and his wife, Mildred, had five daughters and one son all of whom learned and worked in the business as they grew up.

At the time of Rudy’s untimely death in 1958, at the age of 51, the business was prepared to pass the reigns of ownership to the next generation. Jeanne Mayan, their third daughter, was a full-time employee. She took over the business and in 1960 razed the original building and constructed a new one-story office. In 1977, her brother Tom, a Civil Engineer, returned to the community and joined her as a partner in the agency. Under this new partnership, they renovated and doubled the office space, and also began representing Auto-Owners Insurance Company.

By 1986, the third generation of the Mayan family was poised to enter the family business. Tom and his wife, Dorothy, brought their eldest son, Rudy (named after his grandfather) to the team as an agent. Upon Jeanne Mayan’s retirement in 1993, Rudy became a partner in the business with his father. In 1996, a second son, Tom Mayan II, left his banking position and joined the agency as the third partner. The new partnership of father and sons made major renovations to the office in order to provide a more efficient and customer-friendly operation. Tom Sr. became semi-retired from the agency in 2001 and Rudy and his brother Tom assumed the majority of the responsibilities for running and managing the agency.

The Mayan family is firmly entrenched in the community of Merrill. Over the past four generations, many family members have served on various public, church and private boards and committees, giving countless hours of time to public service. It is an important philosophy of the Mayan family to give back to their community. In the past, Rudy served as head basketball coach for the Merrill High School boys’ varsity basketball team, and Tom served as his assistant. In the 1999-2000 season, they led the team to the state finals making for the most successful basketball season in the school’s history. They were and are the only rural school district in Saginaw County to accomplish this feat. Hard work, determination, and a set of sound fundamentals; those same attributes passed down from one generation of the Mayan family to the next, played a key role.

Their success toward writing a balanced and sound book of business with the companies they represent is apparent as evidenced by their historic and continued success in providing the proper coverage’s and service to their customers.

They attribute their success to the business philosophy handed down by their parents, grandparents and great grandparents; recognizing customers as a most valuable asset and always extending them the utmost service and courtesy. They also attribute this success to their current and past excellent, dedicated, and professional staff, working as a team each and every day to do the best for the customers and company partners.